Now, we are lucky to find messages from our ancestors 10,000 years ago in the shape of scratches on cave walls, or carvings on bones. I asked Scouts, Cubs, Guides, Rainbows, Beavers and Brownies what they would like to leave for someone in the future. In our workshops we explored this by making a letter to someone in the future. We used different coloured home-made Mendip soil inks, plus a range of others such as beetroot, blackberry and elderberry ink. The children used feathers or sticks as well as pens, staples, even fuzzy felt. They made letters in pictures or in words about where and how they live, and what they can see, smell or eat. Sometimes they used images and ideas of animals or plants in prehistory. This is no rules letter writing: these letters are about having fun, being creative as well as engaging with Blackdown and its history. The project has been funded by Discovering Blackdown Project. For more about Elspeth’s letter writing project see: https://2buproductions.org/letterwriting

The letters hang on washing lines: pegged up works of art. A small girl charges in, attracted by the colours. She brushes her hands through silver ribbon hanging from a kite letter. She rushes out, then back in again several times. Her footsteps fall on rectangles of sunlight coming through the windows.

Jane who runs Fanny’s café in Blagdon helps me put up the exhibition, draping  string and the large branch she places against the bar with fairy lights.

Once we’re done, I sit in the corner and wait to see how people react.

Four boys search for the letter they wrote in the workshop. A mother points out to her daughter that she’s spotted her letter, and giggles at the words in it. A boy tells his brother that the letter he did is rubbish. It’s painted with local mud and has something about it, I tell the boy, it gives a lot of information to the people of the future, that’s why I laminated it and put it on display.

One of the Cub leaders tells me that the children talked for weeks after the workshop I did with them. Though there’s no time for any thorough research evaluation here, this kind of verbal, even anecdotal feedback is welcome. It’s important to know that there are benefits.

A pair of ladies giggle as they read things such as ‘Broccoli was never meant to have been eaten’ on a letter from one of the Cubs.

A member of the village history society takes a long time over reading the words and looking at the images. She writes in the visitor’s book ‘Selfies and broccoli – brilliant. Really enjoyed looking at your exhibition’.

‘It’s really quite moving,’ says a retired man who I’ve called in from the pavement, walking by. He loves children’s art having worked in a children’s hospital most of his life as a nurse, but hadn’t felt able to come. He likes the inks chosen from Mendip soil. He also likes a glittery splodge one child has made, and the mammoth.

He visits again a little later with a bag full of jars of different coloured oche pigments, from golden to browny reds and one of the pictures he’s painting with them. ‘You can grind the ochre in a pestle and mortar, then sieve it, and grind it once more. That makes a very fine pigment.’

One Cub, spontaneously tells me, ‘I loved doing all this.’ It reminds me how much the children enjoyed the process on those cold winter evenings.

A bunch of girls find it a good place to chat, amidst the letters:

‘The rooms smell lovely – did the children use lavender?’ asks a parent. I say on one of the workshop tables there were a few bottles of essential oils, a few scents, lavender and eucalypus to dab on. That’s what you can do with a real letter.

Next door, the film that year 5 and 6 made for Decoy Day is on a loop, and a lots of people are coming in to watch it. Some of them stay for three sittings. In between or at the end, they eat war time cakes – a fruit cake, or honey cake with a cup of tea, served by the school Class 4 teacher. Then they wonder into the room of letters.

‘They have clearly been able to be free whilst creating these – they’re really special aren’t they?’ one mother says to me. Another writes in the visitors book, ‘Loved the letters and the film – what wonderful creative enterprises! Fantastic that the kids get to express their creativity and individuality. The inks are wonderful.’

I tell one spectator that I was really interested in what the children picked up from the information and ideas I shared with them. I showed a bundle of local maps to the Guides, amidst a lot of images of Mendips animals and plants twelve thousand years ago as well as now. One girl picked out a little bit of one of the maps and drew a field map. Others drew deer, hare and owls.

Some images had real plants on them, or mushrooms:

Others had stuck on fuzzy felt, playing cards or glitter.

There were even letters on a stone I’d brought to pin down paper. 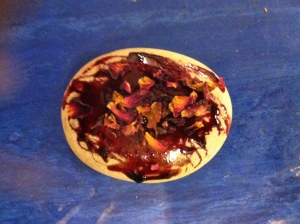 They have really thought about the words, taken care to think what the people of the future might like to hear, and then chosen inks, writing slowly with feathers and wooden sticks, and got on with communicating in the best way they can to the future.

‘What’s going to happen to these letters?’ a few people ask. ‘Something should be done with them, they should actually be given to the future.’ A dad says he can find a box for them, he’ll have a look and perhaps they could be buried in the village? By the end of the day, I’ve found a little money to make this happen, if the children will let me bury them…. and they can have them back in 25 years time.

More comments from the visitors book:

‘In discussion with one of the parents the project has really made the children of Blagdon think ‘outside the box’ and it has inspired them to talk about all their involvement and matters discussed.’

‘Lovely imagination – brought to life. I love the idea that ‘anything goes’.

So – thank you to all the children – Scouts, Guides, Brownies, Cubs, Beavers, Rainbows for all your work, to all the group leaders, Jane Adams for helping me put the exhibition together, Ruth Coleman for sharing the exhibition, and Stuart Bardsley at Discovering Blackdown Project for funding the workshops and exhibition http://www.discoveringblackdown.org.uk and all the people who came to see it.