Green she was, moss green,

So to see her was to see a creature emerge as if out of the landscape,

The curves and rolls of valley,

Somewhere between here and Dolbery Hill.

Down she flew, from high above, breezes billowing,

Down down the valley,

Over the rounded shadow streaked hills, over rivers gushing.

A deer darting below, a fox, a bear, a bird,

A flurry of fairies, a gaggle of goblins,

And a lonely siren in the sea that washed up to the village of Thorverton.

She flowed and hung above Cadbury Castle a while,

And blew hot air out of each enormous nostril.

Claws and prickles on her back scared off attackers when she slept.

They also hid her amongst woody skeleton trees and hedgerows,

Amongst wrinkle like marks where fields have slumped down hills.

She was made out of fire and gas.

Her ears could hear a sound five miles off, so never was a secret kept from her.

Her teeth were sharp and silvery white, they tore up her prey –

A sheep or goat, sometimes a doe or a villager,

But never would a rat or cat or dog fill her up.

Gertrude was her name.

Her roar would reach inside your bones and shake them,

First, let’s go back a bit in time, in fact a thousand years before,

There lived a wizard called Baldwin who lived in the land of Cadbury,

He was sure he’d discovered the trick of turning things to gold,

So he thought of the largest creature in the land to turn to gold,

Which would make him rich forever.

So creep up on Gertrude Baldwin did do.

The cream of a ewe’s milk,

With a pie made of rat’s poo.”

Now Gertrude was reading stories to the dragon she loved,

More than any other dragon in the whole-wide world.

And that was Cuthbert, her little boy dragon, who was naughty,

And not always helpful, but was always a joy to his Mum.

So ready was Baldwin to cast the spell,

When little Cuthbert saw what was about to occur and leapt to his mother’s aid.

‘No….stop’, only to arrive just at the wrong time and got turned into gold himself,

Never to know anymore about it.

Baldwin was furious, as Cuthbert was an eighth of the size of his gigantic mother,

He wouldn’t make him rich at all.

But what about Gertrude? She tore Baldwin from the ground, crunched him up.

With the loss of her son, came her monstrous roar over lane and farm,

Over hump and bump, reaching far and wide….

So she buried her golden son,

And swore to guard that gold until the day that a wizard found a way,

To bring him back to dragon boy.

Only one person knew of the treasure at first –

Though tell he did one foolish day, and eat him up the dragon did.

Gertrude the dragon couldn’t find out who was the one he told,

Until she discovered it was a farmer’s wife, who told a girl, Agnes Fursdon,

What happened to the farmer’s wife?

She got chewed and swallowed.

Agnes Fursdon, well she knew it dangerous to tell,

Kept her mouth shut ‘til she was one hundred and four,

Then she fell dead to the floor and the secret died too.

No-one else knew and the dragon roared no more,

But guarded the Fursdon house and the family there,

Somewhere between here and Dolbery Hill. 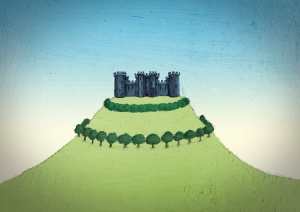 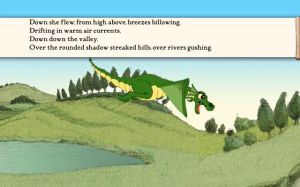 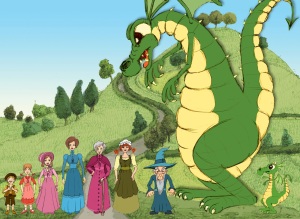 (I  wrote this story for Thorverton school. Sara Burnand and Laurie Steen were running a creative day workshop on dragons at Fursdon House with Catriona Fursdon and Thorverton Head mistress Tania Beard. I wanted to join in because at the back of our house we looked up a little valley and we could see Cadbury castle, an iron age fort in mid-Devon, at the end of it. Catriona and I met up and she told me that there was a mythical dragon at Fursdon, which flew over the area. Dragon’s Love is an embellishment of this tale.

On the day of the workshop, Catriona read out the story to the children on top of Cadbury castle. The children walked back to Fursdon where they made pictures out of red Devon mud.

One sunny morning near Taunton, I read the story to Pete Davies and Stu Derrick of Dream Machine Media (now Navmotion). They said it was just what they wanted, and chose the story. They commissioned an illustrator to work up some images for their e-book template, funded by the Technology Strategy board. The e-book didn’t get made in the end, but I was pleased that Eric Huang at Penguin liked the story.) 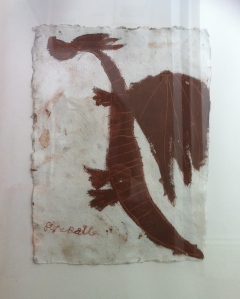